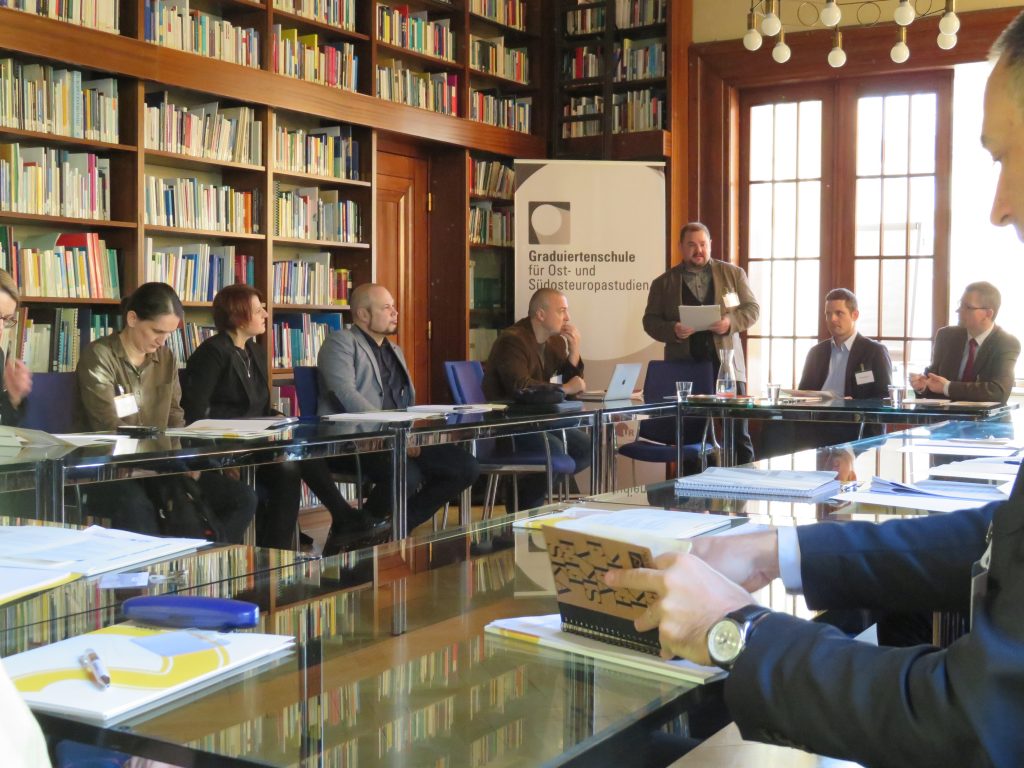 Opening of the conference by the IKGS’ director Florian Kührer-Wielach

Bericht: Paths of Transition / Transformation: Local Societies in Southeastern Europe in Transition from Empires to Nation States after World War I.

On 23rd and 24th November 2017, the IKGS, the Institute of Political History in Budapest, the Graduate School for East and Southeast European Studies, and Collegium Carolinum hosted the conference “Paths of Transition / Transformation: Local Societies in Southeastern Europe in Transition from Empires to Nation States after World War I” on the premises of the graduate school in Munich.

IKGS Director Florian Kührer-Wielach opened the conference and welcomed the 25 participants to Munich. His opening remarks were followed by Gábor Egry, director of the Institute of Political History, and Martin Zückert, managing director of Collegium Carolinum. The presence of these three institutions already set the stage for what was to follow. The primary research regions of the three institutes served as a common theme throughout the conference as conference participants regularly referenced Romania, Hungary and the former Czechoslovakia in the following days.

The conference was organised into five panels over the course of the two days. Panel One approached the broader conference topic by highlighting the issues of “Nations and New Orders”. In his presentation on transfer, transition, and transformation in Transylvania and beyond, Florian Kührer-Wielach introduced many of the topics discussed by the conference’s participants. Johannes Gleixner (Munich) followed by introducing the case of the Czech lands and looking into progressives and socialists in Czech republican ideology in the years leading up to World War I. A similar time was discussed by Călin Cotoi (Bucharest), who presented his research on public hygiene in the context of nation building in 19th and early 20th-century Romania. Ota Konrád (Prague) then shifted the temporal focus to the years after the war, highlighting the role of violence in the immediate transition period from 1917 to 1923 in the Bohemian and Austrian lands. Thomas Varkonyi (Vienna) closed the panel by analysing the attribute “Galician” as anti-Semitic code in Hungary throughout the 1910s and 1920s.

In the afternoon of this first day, Panel Two moved on to post-imperial biographies, to add a bottom-up perspective to the discussion. The panel was opened by Rok Stergar (Ljubljana), who described the end of the Habsburg Empire through the lives of writers and bureaucrats in the Slovene lands. Svetlana Suveica (Regensburg, Chișinău) offered a related perspective on the case of Bessarabia and the biography of Chișinău’s former mayor, Panteleimon V. Sinadino. With the biography of György Bernády, former mayor of Târgu Mureș, János Fodor (Cluj-Napoca) ended the panel.

On the second conference day, Panel Three opened by discussing local societies in transformation. Attila Simon (Komárno) presented the case of Košice in the immediate post-war period, followed by Jernej Kosi (Ljubljana, Graz), who provided insight into another border region of the former Kingdom of Hungary, Prekmurje in today’s Slovenia. Enikő Dácz (IKGS) concluded the panel with a double analysis of transition in Transylvania, examining the towns of Sibiu and Braşov in the years from 1918 to 1922.

Panel Four remained close to the topic of local transitions while shifting attention toward more comparative perspectives. Gábor Egry provided a view into the influence of professional networks in the newly “Romanian” regions of Banat and Maramureș. Ivan Jeličić (Trieste) continued by looking at the city of Fiume (today’s Rijeka) and how local actors reacted to the changing political climate there,

The final panel dedicated itself to “peculiar regions, peculiar people”. Julia Richers (Bern) first presented interwar biographies in Carpatho-Ukraine in the context of the Hungarian-Ukrainian/Soviet power struggle in the area after World War I. Eric Weaver moved on to another “border people” of the former Kingdom of Hungary, the Bunjevci in the country’s south, bordering the Kingdom of Serbia. The last presentation of the conference came from Ségolène Plyer (Strasbourg), who looked into experiences of transition in Bohemia.

The conference concluded with a round table discussion led by Gábor Egry, in which he, Ota Konrád, Ségolène Plyer and Julia Richers discussed the overall perspective for further research on the conference topics. In her closing remarks, Enikő Dácz summed up the main findings, points of contention and necessities for further research, announced the publication of selected conference papers and urged further comparative projects in the near future.